College was not so dull after all,as narrated by some intellectuals,for engineering nerds,constituting up big projects to complete,weary laboratory works to be accomplished and frightful lecturers giving students

nightmares about the monthly scheduled test papers with an obligation to beautify each paper with good grades so as to be a graceful engineer, at the end of four years.The allure of vogue fashion statements showcased by a handful of girls, considered to be eye candies by some,to confess,by all,prattled talks in the cafeteria,guys fulfilling the tall,dark, handsome criteria seemed good enough reasons to dazzle the new boys and girls and also our very own girl from the daily course of studies,at least for a certain era of time,known as the freshers month.


Okay so now here at ITS we had a tradition ,for one whole month,you got to follow ,the not so convincing orders of the seniors,got to say, act, talk, walk,think, dream, everything just every little thing was to be done according to the vogue ,decided by the seniors.Obey the rules,get rewarded,disobey the rules,you will never forget the freshers month.The rules and instructions were simple,as everything in the world seems to be, in first,but remember the deeper you go the hotter the earth crust gets!and that's what freshers month was like,unless you are God's special child like Tiya,having a cousin brother,Electrical department,in 4th year,possessing a quite impressive resume to scare away the awful souls to keep their eyes off her ,but only her.Tiya had a vigorous fight ,as to why she ,Namita ,wasn't granted the official badge to roam around freely,being her roommate,but an opportunity to overpower someone's soul completely doesn't seemed like a candy to loose so easily for the big guys.The official freshers month existed too,however a bit too vague to be excited about, but the unofficial one,the most precarious one, was something one should really really be careful about to be at peace for the rest of their Engineering life.According to the rule book the month following the orientation ceremony was chosen to be the freshers month,by the college as well as the seniors, unbiased apparently.It wasn't the official one,that the students were waiting to begin ,it was how their seniors were gonna scratch their heads to take total control of the first year students.Certain dressing codes along with certain guidelines to behave were announced,to be followed by each and every student without any obligations and queries,in every block where any fresher resided.Things came out to be nightmare for guys as they were supposed to keep their eyes down for the senior ladies and mouth shut for the younger ones,in short,no talking with any female soul was allowed.There was no point opposing it hence everybody just surrendered to the other demands too like ,hair ,to be oiled a way too properly,full sleeves white shirt and brown pants,on all working days with big, I repeat big leather shoes!For girls,no jeans,as you might have guessed, but the suits were supposed to be trendy and not just the usual ones with proper dupattas and all.The hairdo part was supposed to be like boys accompanied by two neat ponytails.Girls were somewhat little lucky,don't ya feel so!After all girls are girls!The whole life guys keep thriving to be with the best girl they might ever know so I guess that explains all!


Namita was all set to go for her second day hoping that things will go in a a similar fashion as that of yesterdays wary day.With her fingers crossed and eyes searching a friendly face,she entered the class and saw a place on the second last bench of the first row empty.Without wasting a second, she acquired that place and the next moment found her new bench mates for the day."Hello",said the one sitting next to Namita."Hi",said Namita inspecting and realizing her to be quite pretty and full of life to talk to."My name is Barkha and I am from delhi and  you are from..?",said the girl without a pause."I am from ....."."Oh okay that's a nice place .I have been to it.So friends?And by the way this is my friend and from now yours too, Himani"."Hi ,I am Himani",said the third girl on the bench ,finally."Hi.."and before Namita could complete her words entered their lecturer with their Head of Electronics and communication department."Hello students ,please be seated I am here for just a few welcoming words to be shared.Well,from now onwards you are a part of this institution for the next four years and it depends on you, whether you get promotion or demotion from your current educational and personal qualifications and standards during the tenure of the next four years.The college and the faculties will help you out in all the ways possible and to wrap up the whole thing,at the end,I would expect that you all will respect the institutions rules and would abide by them proving to be a good individuals."."Thank you sir,"said the male lecturer accompanying the HOD and continued,"I am your class in charge and would take your main subject communication theory,being first year you will only be...So starting with the main topic..."and hence the lecturer hummed about something but Namita's mind was already preoccupied to keep a track of what was being taught in the class.Secondly the freshers month had begun so from tomorrow all the set of rules were to be followed,happily or unhappily,that was left for the freshers to decide.


Why is that life changes its face so quickly that its too hard sometimes ,or always to be at pace with it's unclear enigmatic path.Why is is that relations change their form so fast ,without leaving any space to adjust or to get accustomed to the new pattern.And why is that the new changes are not always so warm and welcoming.During the whole day, all that kept Namita away from studies was,why was it that today Sakshi and Vipsa were not sitting with her?Is she so dull?..that it takes only a day for her Grey looks to avert people from her?What's wrong with her?Why she can't be more than polite and understanding towards human nature?Well,these thoughts might be boring or may look a bit awkward or present an exaggerating emotion donned by Namita but for her,the only thing she was concerned about,more than her studies, was why she was unable to make friends on the second day even!During the lunch hours too she was with her new colleagues.All the way, back and forth from class to mess, she kept on thinking why all of a sudden this change had occurred.But she was helpless and thought to give it a deep thought at night,soaked into tears as tears were her,doubtless best friend.After finishing all the chores she rushed to her room. 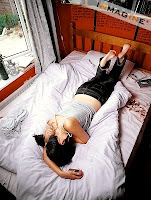 Tiya had already gone for the volleyball practice hence it was just the perfect time for her to be in her grey form.She straight away went to bed,lying upside down on her stomach,throwing the bag away from herself,depicting her throwing skills,and kept on thinking about the class' happenings till she fell asleep.All she dream of was about she being again with Sakshi and Vipsa clearly showing how hard it was for her to make new relations.The dream would have continued but guess someone wasn't in a mood to let her unconscious mind to take more control of her for the moment.Her phone was ringing.She vaguely searched for it and discovered it finally on some deep edge of the bed and as she pressed the answer key ,heard somebody knocking at the door."Hello..",she somehow managed to attend the door as well as her phone at the same time.Tiya was standing ,imaptiently to get in,all soaked in sweat.But Before she could open her mouth Namita made herself busy in the phone."Hey..what a pleasant surprise.I wasn't expecting a call from you at this hour of the day.Anyways..How ya doing..?",Namita looked too excited to Tiya to guess that somebody from home was on the other side."OH..Okay..cya then.Bye",the call ended,was very short to be precise but the smile it gave, everlasted on Namita's face."So Tiya how was your today's volleballsession?",the question came as a surprise for Tiya from Namita, anywasy we know Tiya loves to narrate every little thing that had happened and hence all she was concerned with ,she had been offered the chance to speak,finally and both the roomies spent a nice time that evening.


And so the night marks the end of the third part of the story.But certain new theories have emerged which do need an explanation!Why were Vipsa and Sakshi not sitting with Namita today?Does she really need to be avoided so early?Who was on the other side of the call?and the million dollar question..what's so important in the freshers party that it is going take over almost two next parts!Well to find out the answers,hope you know what to do!Keep reading.Adios.