It was dinner time now. We had our food and just sat down, with me sitting by the window, chit chatting with A sitting next to me and V sitting next to him. The 30-32 year old guy on the berth in front of ours was sleeping since the train had started and was still sleeping. He slept the whole journey in fact! Kumbhkaran ka bhai ! He had an impressive sweet notebook though! Woh bhi Dell ki ! Anyways, after having our food, the three of us started sharing things, about our past and present. V has been my best friend for more than two years now but the bond between S and A was just beginning to take form. A is a very nice guy to talk to. I must admit, I do enjoy his company.

So, we decided not to sleep and wait till morning to see the sunrise. Actually, it was my idea. I had never seen a sunrise from a train. I thought it would be different to look at but stupid me! It’s all the same. Slowly slowly, all the lights in our coach started dimming and after 11 it was pitch dark inside the coach, only the lamp on our berth was up. We were still chatting, about our placements, how the whole journey has been and also listening to the interesting love story of A. Man, he really did love his girl. But unfortunately things couldn't work out well.When I and V asked about all his love life, it was a scene to see. A was just so shy to say it! Lol. Sorry A, but I am never going to forget those expressions on your face :P You looked good. A small baby, trapped by cruel people, asking every personal detail! You were not even able to look up :P and this was the best part. But A, seriously, you are a great guy to be friends with. V and I literally enjoyed troubling you ;)

The journey had been good so far, I was at ease that that guy didn’t turn up again but not for too long could I be at peace. He turned up. His was the middle berth in the row in front of ours. He climbed and lay down. I don’t know whether he was sleeping or not but I felt a bit of uneasiness with his presence. He could very well understand what we language we were speaking. Anyways, ignoring him, we got busy among ourselves again. Listening to music it was fun in the train at midnight. It’s nice to be in company of good people. A and V are nice people .


( I now think at times, why I met A so late L But then you can’t control everything in your life, isn’t it!  )

Bored from listening to songs after sometime, A decided to stand near the train gate for some time. Watching out of the gate, with cool breeze striking you face was very relaxing. However the nearby sink was stinking a bit but   the company and the inner peace of getting the job had added up to please me to stand there. ;)

The talk with A at the gate that night is something I will always remember. It was a talk to remember. I haven’t seen many simple, nice and honest people as A. Just like a sweet naughty kid, he shared his life with me. He looked cute! People often complain that whenever they are with S, it’s only them who are talking and not S. And they think that S doesn’t wants to share herself. Actually that’s not at all the case. A, you too might had this thought in your mind that day but honestly, I was just lost figuring out how can anybody be so good and sweet like you in today’s world! I am sorry if anytime you felt that I wasn’t sharing my thoughts with you.

And then joined the other cute guy, V ! He came searching for us like a lost puppy ! He thought we had intentionally left him behind to get bored but actually V, A and I were just talking and didn’t realize how much time we had been there without you!

Hence after spending some more quality time at the gate, we came back to our respective seats. God, I should have recorded the synchronicity of the snores, the people were trying to follow in our compartment. It was like as if a band of snoring people was being formed. A made fun out of some peculiar snores! LOL. It was fun that night. A night to remember. 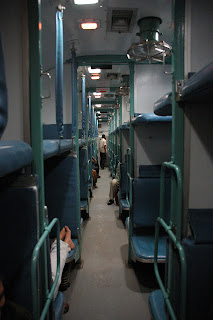 I could see that man up there on that berth, trying to hear us out, shifting from one side to another side, but then he still was on my ignore mode and I didn't feel anything to make A and V be aware of ! My mistake now, I guess.