Tamil Nadu express came and we searched for the coach for which we had tickets for, sleeper coach. We did find our train coach and thankfully the T.T. too. A talked to him, explained him things and hence he agreed to issue 3 tickets for New Delhi. Oh man, what a relief it was to actually know after so much of hush and rush that finally we will be on a peaceful train back to Delhi, without any fear of being humiliated anymore by anyone! But then, life is not so smooth baby! It's always a bumpy dumpy ride ;) And this is what actually makes it the thing called Life !

We got 3 seats. Two lower berths on the same side and one upper berth on the other side. Everybody was sleeping, snoring to be precise. And why not, not everybody's journey has been so tragic as ours. That we were threatened out by a group from our train at such point of hour! It was 2 in the morning! We settled down our luggage once again, patted ourselves for taking the brave step of getting down on Gwalior and then managing to get ticket to the next train to Delhi. We were tired but sleep was no where to be seen in anybody's eyes! I guess so much had happened for anybody to sleep! It was the first time for S, A and V too I suppose, that something like this had happened! But still we decided to give our strained bodies some rest. A and V have been up all night yesterday even because of S! And today too because of all this drama they just couldn't sleep! Sorry A, Sorry V.

Somehow, we went to sleep. A got onto the upper berth and S and V decided to sit for sometime and chat on the lower berths. They both had a breath of relief but not so soon! Poor babies! As Then came the devil! That idiotic policeman! A lad of some 40-45 years of age with a dirty mind! Yes, now you can make up the things he was thinking on seeing a girl with two guys, traveling at night. He sensed by seeing us that we were not the usual travelers of sleeper coach. Also S and V were up so late and talking! He came and sat on our berth! Tried giving some stern looks, thinking that could scare us off! S sensed another nonsense was about to start and again she was pissed off! Why does so much had to happen in one single day! God, Why? 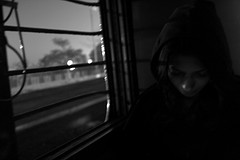 The policeman started talking to V. "Where are you coming from? For what work had you gone to Chennai? What's in your suitcases? Open your bags. I know what's going on here. I have news for such things to happen. And etc etc etc...this is some of the bullshit we had to face in this train too! (Please pardon my language )

I just don't understand why people don't mind their own business? Why do they have to trouble innocent people? Like the way this guy was treating us. He had no shame in saying all that shit ! As if he had no daughter, sister or mother back at home! A****** (Sorry for the language again)
He asked V to accompany him to the gate of the coach! He wanted money, that was clear. Because how could he spare innocent students like us at that point of time! Anyways, V waved him off finally with some money! Money does wonders in this world I tell you!

And finally, finally, finally,...now we were relaxed! Finally, we had no stupid thing bugging us! It was 4 in the morning. A was down now and V went up to sleep. So sorry, A and V. For two days, your sleep was totally ruined. But it was fun for S to have such chit chat sessions with them, turn-wise ;) And alas, came Delhi! What a relief it was to see northern region again! Suddenly all the so bad sights started appearing to be nice! ;) Yeah, we did miss our region. We North Indians may settle anywhere but at the end, we will always love the places we originally come from!

And finally came the station, Nizamuddin. It was 7 in the morning! And we were finally home! This whole journey had a lot of turns and twists, a lot of drama and a lot of bonding! It was an epic journey!

( Next Read : What S has to say on her experience about the journey, Her perception about the whole thing, what she felt and how she tackled it all! )
Posted by Smita at Sunday, October 09, 2011

Interesting One!! Got worried for few moments... But getting down at midnight was surely a brave thing to do. Life teaches you many things, when you get out of your comfort zone.

yea, indeed that step was a very bold one on our part but we had to do that to save ourselves.
The whole thing was a big experience, to learn from ! ;)
Hope you enjoyed reading :P

am pleased for this super post, I am happy I detected this blog on bing .

Before I go, give permission me thank you for your patience with my English as (I am persuaded you have become aware this at this moment ,), English is not my main tongue hence I am using Google Translate to build out how to put in writing what I actually want to say.

anonymous : glad you liked it :) And not a problem, we have google and many other translators to communicate :)
Keep visiting :)