"I would so love to wear a lehanga. I even had a plan to buy one but sadly couldn't", she sighed.

They were passing by some Suits, Saree's shops. 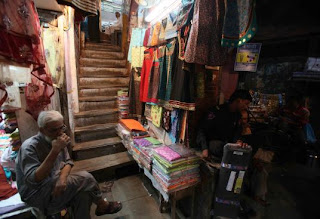 Embroidered with various shining stone pieces, they all looked like river of cloth flowing in the showpieces with different colored stones in that river. All the dummies wearing those beautiful pieces were going to be in her dreams now for the next few days.

Shop by shop they went .Glaring into the glasses. She was capturing every style, every color in her eye frames but He seemed a bit worried. Little lines on his forehead could tell that.

"Hey, look. This one is pretty na. I have heard that Chandni Chowk is paradise for such work lovers", she said, pointing at some of the sarees adoring the showcases of some shops.
Walking in those streets, as narrow as they could be, was fun. Away from all worries and tensions for sometime, the whole thing was simply beautiful .

Window shopping is fun when you don't have the urgency to buy something that's certainly not in your reach.You can just carry on and on and on, staring at the things you like, without paying a penny. And at the end, get bored, and move on to the next shop to do the same thing again ;)

The day was one of those memorable days that she would like to preserve forever and remember afterwards. Walking up the length of the market, with such a nice company. Eating all those delicious foods and paranthas, food having the real taste of India.

Trying things never done before. Away from the eyes of everybody, were these two souls, roaming around, chit-chatting in their own world about their own world, from stuff about first semester of college to their present day placement scenario. From their likes and dislikes about families to the stuff being sold in that market. From food to places, from market to college, everything was under their topic of discussion today. 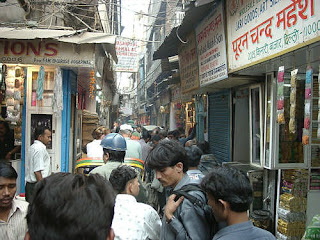 That long walk in those long streets seemed nothing to her, but he still had that worried look in his face.

She was trying, trying her best to know what could be the reason behind his tensed expressions. But since they vanished every then and now, she thought maybe the crowd and the place was what made him get those lines of worries.Also asking him the reason, didn't seemed to be a good idea.

But thankfully, he himself revealed the whole mystery of tension!

"Err...Where are we? Will this road end at some place or not?", he said, like a baby! Lost in the market but given a responsibility of another person to take care, whom he simply couldn't afford to get lost with!
And there she giggled!

"Oh God! You were tensed about this thing!", she laughed.
"Arree, of course these streets will end somewhere na, and then we will find our way out. So what's the big deal!", she said smiling.

But the mister still had doubts about getting out of the network of those streets, hence he inquired at some two three places, as to where the road they were on, will lead them to! Everybody gave the same answers,"Yes, you will find an exit just after walking some more steps,", "Don't worry, there's an exit at the end of this road to the main market area", " Yes, the exit is just few steps ahead".

But the thing that really did brought his mind at peace was the sight of the road's end itself. Those narrow street did finally opened into the middle of the market and there he was relieved of all of his tensions and worries. Then she bought herself a novel, they had lunch at the paranthe waali gali, yummy food served in another narrow street, but not too long this time to bring tensions of getting lost again! ;)
Posted by Smita at Sunday, October 30, 2011

Hi there, yeah this piece of writing is in fact fastidious and I have learned lot of things
from it about blogging. thanks.
Also see my site - Upper James Manor - Greg Iacomo

Amazing issues here. I am very glad to peer your article.
Thank you a lot and I'm taking a look forward to touch you. Will you kindly drop me a mail?

Feel free to visit my web site; villas in Oba for sale

great issues altogether, you just received a new reader.
What may you suggest about your post that you simply made some days in the past?
Any sure?

These are actually wonderful ideas in regarding blogging.

You have touched some pleasant things here. Any way keep up
wrinting.

Here is my web-site ... torrent movie downloads us

Hi just wanted to give you a brief heads up and let you know a few of the images
aren't loading correctly. I'm not sure why but I think its a linking issue.
I've tried it in two different browsers and both show the same results.

Have a look at my webpage :: cfnmfever.net

At this moment I am ready to do my breakfast, afterward having my breakfast coming yet again to read more news.

Here is my weblog; www.jnmassage.info

Stop by my web page :: www.xxxmoviegalls.com

Woah! I'm really enjoying the template/theme of this blog.

It's simple, yet effective. A lot of times it's very hard to
get that "perfect balance" between superb usability and visual appearance.
I must say you have done a superb job with this. Additionally, the blog
loads super quick for me on Firefox. Exceptional Blog!

Good blog you have got here.. It's hard to find high-quality writing like yours nowadays.
I seriously appreciate people like you! Take care!!

Everything is very open with a really clear explanation of the issues.
It was truly informative. Your site is extremely helpful.
Many thanks for sharing!

Magnificent beat ! I would like to apprentice while you
amend your web site, how could i subscribe for a blog site?
The account helped me a acceptable deal. I had been a little bit acquainted of this
your broadcast offered bright clear idea

Also visit my web page - do you agree (http://blogymate.com/blog/ayalazojo)

I don't know if it's just me or if everyone else encountering issues with
your site. It seems like some of the written text on your posts are running off the screen.

Can somebody else please provide feedback and let me
know if this is happening to them too? This may be a problem with my browser because I've had this
happen before. Many thanks

Hmm it looks like your site ate my first comment (it was super long) so I guess I'll just sum it up what I submitted and say, I'm thoroughly
enjoying your blog. I too am an aspiring blog blogger
but I'm still new to everything. Do you have any tips and hints for beginner
blog writers? I'd certainly appreciate it.

You really make it appear so easy with your presentation but I in finding this topic to be really one thing that
I think I would never understand. It kind of feels too complicated
and extremely vast for me. I'm having a look forward
on your next put up, I will try to get the dangle of it!

Here is my blog; http://hinhnen.chopho.vn/profile/xgyro

Hey there! This post could not be written any better!
Reading through this post reminds me of my good old room mate!
He always kept chatting about this. I will forward this post to him.
Fairly certain he will have a good read. Many thanks for sharing!

whoah this weblog is magnificent i love studying your posts.
Keep up the great work! You know, lots of people are looking around
for this info, you can aid them greatly.

Feel free to surf to my web site: http://Www.malariaprevention.co.uk/countries-territories-malarious-areas/

Hello, everything is going perfectly here and ofcourse every one is sharing information, that's truly excellent,
keep up writing.

Thanks for finally writing about > "Lost !" < Loved it!

Feel free to surf to my blog post; http://www.malariaprevention.co.uk/lariam-mefloquine/

Hi mates, fastidious piece of writing and fastidious arguments commented at this place, I am actually enjoying by these.

Very nice post. I simply stumbled upon your blog and wished to mention that I've
really enjoyed surfing around your weblog posts. After all I will be subscribing in your rss feed and I hope you write again very soon!

Hi, i feel that i noticed you visited my blog so i came to return the favor?.I'm attempting to to find things to improve
my web site!I suppose its ok to use some of your concepts!!


Look into my web-site :: 7 days to die free game download

Very good post. I am going through some of these issues
as well..

My family every time say that I am wasting my time here at net, however I know I am getting experience every day by reading thes nice
articles.