Yea!
We had no other choice but to escape. But the question was how? We had our luggage chained for security. So now we had to unchain it, gather all our stuff and get down, taking in consideration the fact not to get into notice of that group! All this seemed simply impossible to S! She was just so scared that now her faculties had failed to co-operate. V came to the front and suggested the whole course of action! Kudos to you V! You saved us all! A and S would never have got this whole idea of changing train at that point of time as S was totally blank as to what was happening!

A and V quietly managed to unchain all the luggage. We had 3 normal size suitcases,with one less heavy than the others, 2 shoulder bags and one hand bag! Enough luggage to escape a train in just 5 minutes. But Quickly we packed things to leave as all We wanted at that moment, was to get out of the train now, away from those scary elements.

But it was not so easy. Two people from the group were standing on one side of the door and the other two were standing on the other exit of our coach! So literally they were spying on us now as they had an idea that we will be going to New Delhi and will be getting down there only. But They didn't have the slightest idea that we can be so brave as to get down on a station at 1 A.M!

Quickly S was told to get into line of the passengers who were getting down from that coach. Hurriedly S got hold of some luggage and within a flash she was down, next came A and then V! The whole group was now standing altogether on the station watching in amazement our movement! They were confused and surprised! Just like a hunter holds expressions on his face when his prey, for which he has been waiting for long, escapes his well skilled and managed trap! Poor guys! All they could do as of now was to watch the three of us march away from the train.

Now that was a brave march, filled with terror of-course! ;)
When we got down on the platform, we saw them standing on our right, so all three of us started marching towards our left. A being followed by V and V being followed by S! They kept walking with their luggage, with out daring to turn back to see the position of that group. They were literally running! And thankfully, the train started to move as soon as they had got down! Else they had a fear that the group .
Those guys had an awesome look of pity, disgust and irritation of loosing us on their faces! Lol!
Poor idiots :P

Finally, the train left. What a relief it was for all three of them! But what now? At 1 A.M. we were at Gwalior, which is some 300 Kilometers from New Delhi! And all this drama wasn't known at anybody's home! So now the three of us had no clue what to do! How to get back to Delhi? The station was however too big and crowded at that time but still one can very well imagine what kind of people you get to see looking at you if one girl and two guys are together, even when they are friends only! Why is it so hard to exist in this crazy men world! 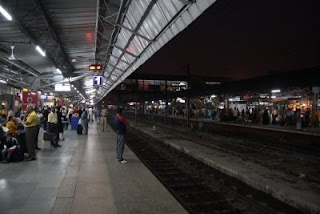 Anyways, V rushed to the ticket counter to check for the next train to Delhi. And he was told that Tamil Nadu express was coming in few minutes! So now we had to wait for sometime. However we had got a ticket but still we had to talk to the T.T. of Tamil Nadu express to arrange a seat for us!

So technically it was kinda Jab We Met scene there. Minus the fact that the train had not been missed unintentionally but intentionally ! ;) We waited for some half hour, had coffee, managed to pass all the staring people before we saw Tamil Nadu express approaching! The sight of the train was a relief now but still this wasn't our happy ending! Or S's happy ending!
Posted by Smita at Sunday, October 09, 2011