Being given heavy medicines,he was supposed to gain his conscious by 12 , it was 1 now ! It was difficult for my heart, to keep pace with time as every passing minute was bringing more unrest.Everybody was calling, inquiring ,why haven't they called? He must have gained his senses by now,ask the doctors,what's happening inside? Is he okay?When called, doctors said, as soon Father will gain his senses we will be called and as of now, nothing was there to panic about.How easily the nurse said this, but ask a daughter's heart,what was there to panic about,who had not seen her Dad for more than 24 hours now,whose Dad has undergone a major surgery but hadn't had a sight of him yet!Ask a wife,who has been sleepless last night, thinking about all the recent adverse advancements in her life, has been thinking about how to put everything back in place, ask them why there was a need to panic.But as said, before time and fate, what can one get and we were called at 4:15 pm, alas.Had been 4 hours over, since we were promised to see him but to see him was the main course and not as argue over what we were promised.To see him, to see how he's doing, to cheer him up and free him of all the worries, was the prime concern and hence after 26 hours, I saw him!

The most agonized yet the most  moment ecstatic moment of my life was now! To see Father, penetrated by different tubes, pinched by numerous syringes wasn't a sight to smile but here I was, smiling, greeting Father as if nothing has happened.Poor Girl, what else she could do! Pity.I smiled, greeted him and all I could say was " You looking good Papa.Don't worry for anything, everything is going to be fine very soon.Just keep your strength like you have kept till now."I was beginning to feel nauseating.Sorry, couldn't bear the ruthless site of Father hence asked for the permission to leave with a promise to come tomorrow.My head was spinning by now and I just wanted to leave the ICU, I was starting to loose my senses but before leaving I heard the most wonderful three words,"I Love You beta?(my child)",and I turned to leave before he could see my tears ! 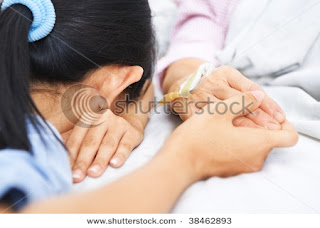 The surgery was successful, he would be discharged in some weeks time, CABG was over but this wasn't the end, rather this was just the beginning of yet another CABG Process!The process to get him out of the surgery depression, to make him believe he would be fine soon, to settle all the storms arising and to boost him up physically and mentally.

I thank God for giving me and my Mother, the strength that we are having, to till date, trying our level best for reviving things back to, as they were.And here I end this series.Ending as I don't wish to write the pain I have been through after where I am ending this series, as it is still continuing and some people may even think that I am touting my pain, my sufferings, over hyping small things, which some believe aren't even happening or worthy of being depressed for.I have no stamina or will to fight against them as they are mere ignorant people,God Bless them.May they never fall in such a situation as I am in, as then only one can understand what made me write this all, And as to what phase of life I am going through! I ain't masochist or one who likes to publicize things without a reason.I don't care as to what impression one may get from my writings as I have enough faith in my writings, that none is being hurt hence I don't wish to write more, because the pain I am experiencing now, is simply unexplainable and implacable.

I have a tough exam in the morning, and m not prepared

I felt as if everything is happening before my eyes. with each word I was praying to god for his recovery. I can't stop my tears

I pray for your dad's recovery. And don't worry, nothing will happen to a Dad who has such a loving daughter :)

raumali dasgupta : Thanks a tonn for such lovely supportive words :)
Dad is okay but still the CABG ghost is hanging onto him, but I have full faith in God and I believe soon everything will be alright :)

This is indeed one of my greatest blog post series ever written. :)
Thanks for visiting and commenting :)